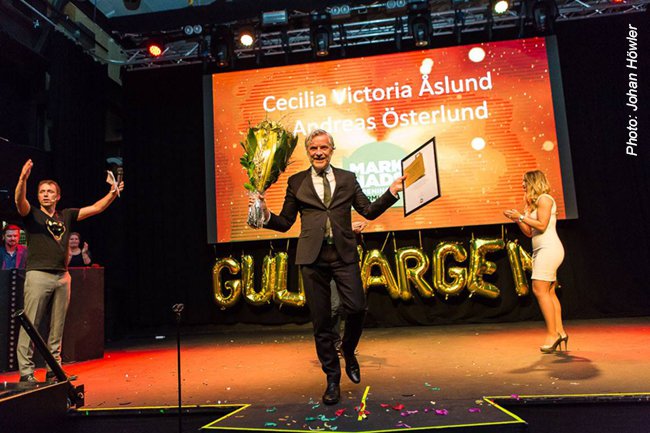 At the start of March 2017 Olle Olsson of Kostym designindustries, part of the Marvaco group, won an honorary award for his achievements in design and marketing at Guldvargen.
Kostym were also nominated in the ‘Best design’ category with two entries, Vegme and Vegott. The entries were designed as two vegetarian collections produced for Gastronova AB and Bergendahls Food AB.
We’re of course happy to have such talented designers at our companies. Thanks to our purchase of Kostym designindustries we now have an opportunity to offer both existing and prospective clients a full concept solution, says Kai Lankinen, CEO of Marvaco Oy.
Kostym designindustries have been a part of the Marvaco group since April 2016 and its main focus has so far been on working with companies in the Swedish market. Marvaco is the largest packaging prepress company in the Nordics and have offices in several locations both in Finland and Sweden.
I couldn’t believe it at first. It feels great to see that my hard work for ethics and aesthetics in a quite superficial industry has paid off, says Olle. All of his colleagues also agree that it sure is a great achievement.
For further information, please contact:
Kai Lankinen, CEO of Marvaco Oy
kai.lankinen(at)marvaco.fi